Why the FTSE could be headed for a 19% sell-off 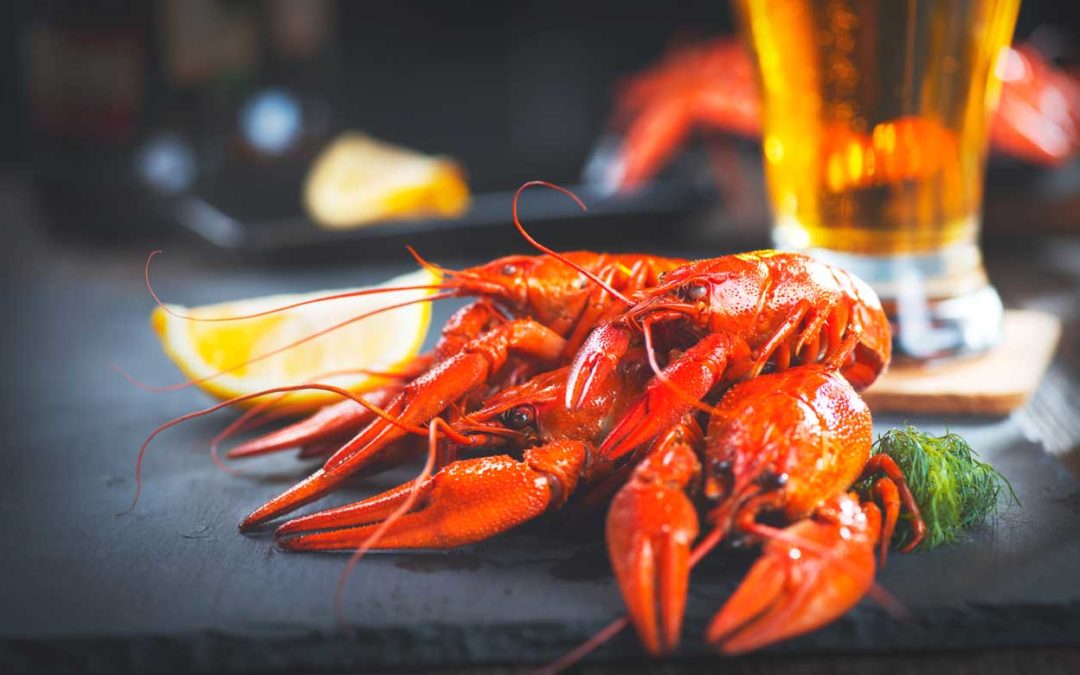 The US and China continue to lock horns.

It’s a major threat to the American stock market and to both countries’ growth.

But it’s not just about those two.

This isn’t just about Trump punishing China with billions of dollars’ worth of tariffs on goods and services the US imports.

And China’s retaliation, hitting the US goods and services it imports.

It’s about the ripples those actions cause around the rest of the world.

How it will affect global markets – right down to the value of our pension funds and stock portfolios.

We’ll come back to that in a moment…

Today I want to focus on the full fallout from this trade war. How it will hurt all sides – from the consumers to companies to the countries’ economies themselves.

For example, prices on imported goods certainly will go up. Which means that domestic US producers won’t have to reduce prices to compete.

That means consumers end up paying more. Which hits their budgets and has a ripple effect elsewhere in the economy. Maybe they have to cut out some other discretionary spending to balance their books.

And it’s not just consumers being squeezed. Businesses will take a beating too…

When their lobsters enter China, they’re subject to a 25% tariff.

Meanwhile, the tariff on Canadian goods is only 7%.

So, Chinese buyers are switching to lobsters from Nova Scotia.

The knock-on of that is that US lobster prices have fallen to two-year lows.

Which I guess is good for local lobster fans…

But it’s devastating for the local lobstermen and dealers. Jobs have already been lost due to the tariff-induced price squeeze.

That means higher costs for American Keg, higher prices for their product… and a loss of business as customers go elsewhere.

Just like the lobster farmers in Maine, it’s resulted in job losses… which ultimately will impact on the economy, both local and national.

And those are just a couple of examples of industries where companies are feeling the pinch due to the ripples caused by the trade wars.

But the effects will be far wider reaching as this thing carries on.

Reuters reports it could affect everything Americans use… “from cradles to coffins”.

Fortune picks up the story…

[Trump’s] threat to impose tariffs on virtually everything the country imports from China means everyday items including clothes and shoes in closets across America could be targeted, from Victoria’s Secret bras and Under Armour sports gear to Nike shoes. There will likely be no escape for Apple smartphones, either.”

It’s the companies operating within China, too.

According to the FT, more than 60% of US businesses are already feeling the pain caused by tariffs.

Profits are getting squeezed, production costs are ballooning and demand for products is drying up.

And that’s just after the initial $50bn bilateral penalties so far imposed.

Eric Zheng is the chairman of the American Chamber of Commerce in Shanghai.

He’s close to US businesses in China and in constant contact with their leaders.

He said, “tariffs are already negatively impacting U.S. companies and the imposition of a proposed $200 billion tranche will bring a lot more pain.”

Not to mention the potential $267bn more in further duties Trump is threatening if China retaliates.

So far, we’ve talked about the effect on the American man on the street – consumers and employees.

Tariffs can have a direct knock-on effect by causing prices to rise. And for some, it could lead to the loss of a job if the business they work in has to cut costs to compete.

And we’ve talked about companies, both at home and in China.

But all of this together also has an impact on the economy as a whole.

“While the tariffs may provide a boost to concentrated industries like steel production, the losses will far outstrip the gains, economists say.

“For instance, the Trade Partnership — an industry group that analyzes free trade — found that the steel and aluminum tariffs would result in approximately 400,000 lost US jobs. Layoffs from the cost increase at manufacturers that use the metals could be far larger than the roughly 30,000 jobs in steel and aluminum production that could be gained.

“These cost cuts, price increases, and layoffs will add up, economists say. The ultimate result: A slowdown in US GDP growth, and pain for the economy.”

But this is not just about the US and China.

And the one that really has the potential to bring this whole house-of-cards market crashing down around us.

A wake-up call for investors!

Especially when investors finally wake up and take notice that all is not well – and that just because the markets have been going up, doesn’t mean they will KEEP going up.

Because that’s how many investors seem to think…

Andrei Shleifer is an economics professor at Harvard University.

He’s the co-author of a new book I like the sound of, called “A Crisis of Beliefs: Investor Psychology and Financial Fragility.”

It’s about the 2008 Lehman Brothers collapse – the thing that sparked the whole Global Financial Crisis and brought markets crashing down.

Prof. Shleifer talks about how, based on recent market conditions, investors tend to make “intuitive extrapolations” about future conditions – which are often wrong.

Shleifer explains: “The extent to which people’s expectations of future stock-market returns track the past 12 months of returns is astonishing. If you have a period of financial stability and rising prices, people think that’s representative of future continued stability, so they underestimate risk and overestimate returns.”

If this trade war gets out of hand, sooner or later markets are going to take a major hit.

Christine Lagarde at the IMF has been saying it this week, the Malay Mail reports:

“The intensifying trade war between China and the United States could “shock” emerging markets that are already in danger, the head of the International Monetary Fund said in an interview published yesterday. As a result, crises in Turkey and Argentina could spread.”

She says that if things keep going the way they’re going, there could be a“measurable impact on growth in China”.

That’s not good news. China is seen as an engine for future world growth. If its economy slows, it could cause the world economy to stagnate… or even edge it towards recession.

Especially when you consider the ripples into other developing economies…

Lagarde believes it could “trigger vulnerabilities” in some of China’s“neighbouring Asian economies whose supply chains are closely linked to Chinese industry”.

And the contagion doesn’t necessarily stop there, continues the Malay Mail…

Sooner or later that kind of economic impact could spill over into the financial markets.

Could we get a major sell-off in US, European and even UK stocks? There’s a good chance that we could.

The team at Factset talk about their “worst-case trade war scenario”.

They’ve modelled it based on how markets reacted to the Brexit vote here in the UK in 2016.

If it plays out, “most major economies would take a hit and the U.S., along with a few others, would see a bear market emerge,” CNBC reports.

“In the case of the escalating trade tensions between the U.S. and China, while financial markets still appear to be discounting the global impact of a trade war, our analysis shows that if/when the market does react, the effects will be widespread.”

The first is what they call the ‘base case’. In that scenario, the US/China trade dispute carries on along the path it’s on now. Tensions and tariffs gradually escalate.

The second ‘optimistic’ scenario is where both sides reach broad agreements about the future, but the recent tariffs remain.

And thirdly – the ‘worst-case’ or ‘conservative’ scenario – there are rapidly deteriorating relations, leading to “a more profound impact”, as CNBC describes it.

This table is how Factset see some of the major global stock markets reacting to those three scenarios. (I’ve circled the US and UK markets in red.) 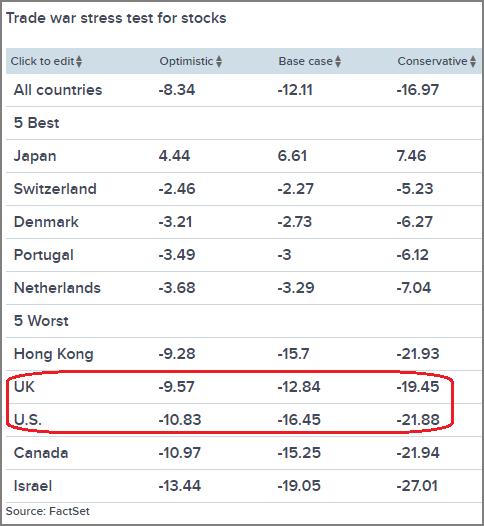 Factset says winners and losers are based on how closely they are tied with the U.S. on exchange rates.

So, economies with a close relationship tend to lose. The ones not tethered to the dollar do better.

But the point is, the fall-out from the trade war will not be contained to the economies of the US and China.

Of course, the tariffs will hit both trading parties by “creating inefficiencies and lowering future economic growth”, Ian Hissey explains.

But the net effect will be a “a negative impact on equity market valuations”around the world and “a flight to quality assets”.

As UK investors we’re not out of harm’s way, by any means.

Emerging markets as a group measured by the MSCI Emerging Markets Index are in bear market territory.

If an escalation in the trade war sparks a panic in those markets, we could see it spread like wildfire and the start of a major rout.

Now is probably not the time to have ALL your wealth tied up in stocks.

It makes sense to keep some in other quality assets that might seem out of favour right now… but could become VERY popular if stock markets take a major turn for the worse.

Gold, silver, gemstones and other ‘alternative’ assets fit the bill. Unloved right now… but likely to do well when Hell breaks loose.