How do we stop a rising tide of superbugs? 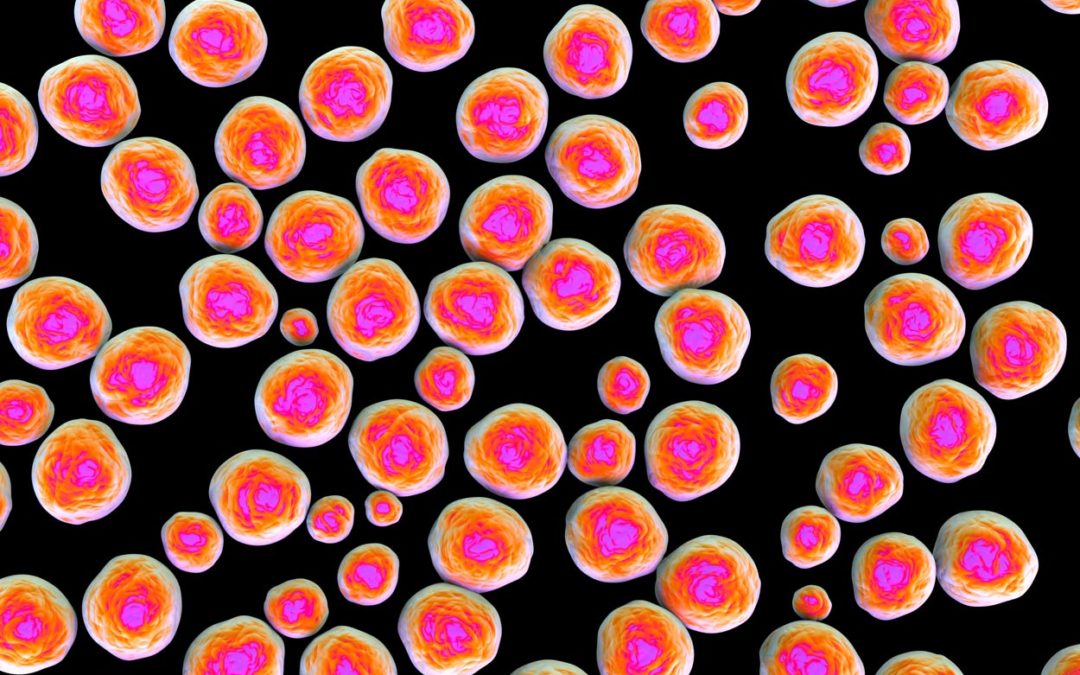 This bug was causing blindness, flesh-eating infections and meningitis.

And disturbingly, it seemed resistant to antibiotics.

“Klebsiella pneumoniae” was found in patients at the Christian Medical Collage in Vellore, over a two year period. 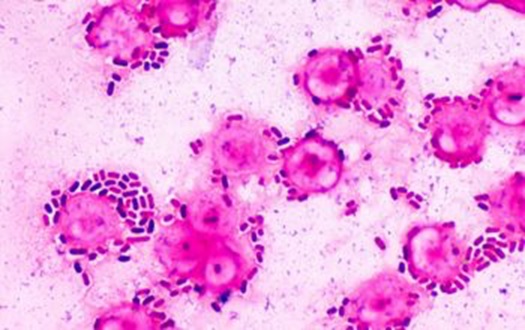 First identified in Taiwan in 1981, it spreads fast through the bloodstream.

The strain has been associated with high mortality of up to 42% in other countries.

However, the Vellore study found a mortality rate of up to 84%.

And this new strain keeps showing up.

On August 25th 2016, a patient in here 70s was admitted to a hospital in Nevada with Klebsiella pneumonia. She had just returned from an extended trip to India where she had fractured a hip.

The patient, isolated in a room in the hospital, survived a few days as doctors experimented with 26 different antibiotics.

And there is now a growing fear that this superbug could spread through one of a number of hugely populous countries are facing a losing battle against superbugs.

Our time with antibiotics is running out

In fact, there is mounting evidence that bacteria is evolving to resist antibiotics faster than ever.

Just this month, The Organisation for Economic Co-operation and Development (OECD) estimated resistant infections could kill about 2.4 million people in Europe, North America and Australia by 2050 unless more is done to tackle the problem, which it describes as “one of the biggest threats to modern medicine”.

They estimated that by 2050, “the issue could kill an extra 10 million people a year and cost up to $100 trillion if it is not brought under control”.

Part of the problem is the pace of drug discovery.

It takes scientists ten or more years to develop a new antibiotic and get FDA approval.

And there is little in the way of financial reward.

Pharmaceutical companies can earn a lot more money from drugs that are taken daily to manage chronic conditions – such as anti-retrovirals for the treatment of HIV. Antibiotics are less attractive, because they are used for courses lasting just a few days at a time.

The incredible usefulness of antibiotics means that they are extremely widely used. And this creates a survival ‘incentive’ for bacteria to evolve resistance.

As these new strains are better equipped to deal with the hostile, antibiotic-filled environment, they in turn start to become the dominant strains.

This has given rise to what are often life-threatening ‘superbugs’, versions of bacteria such as salmonella, staphylococcus aureus (which is behind the MRSA hospital-acquired infections we hear so much about) and e-coli, which can’t easily be killed with antibiotics.

Alexander Fleming, the discoverer of penicillin, saw all this coming.

“Bacteria are very clever and will form some bacteria which will not be killed by my penicillin”.

His prediction was that overprescription of penicillin would be responsible for “the death of man”.

How we get out of this mess

So what can we do?

Well we could stop over prescribing antibiotics to people, says the OECD.

But this is a losing battle.

In Brazil, Indonesia and Russia, for example, between 40% and 60% of infections are already drug resistant, compared to an OECD average of 17 percent.

And so doctors in these countries are doubling down.

At the forefront were India with a 103% increase, China with 79%, and Pakistan with 65%, according to an international team led by Eili Y. Klein of the Center for Disease Dynamics. 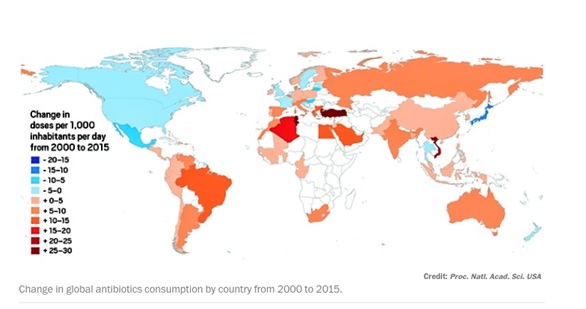 Then there’s the problem of the use of antibiotics in agriculture.

Consider this statistic: in America 80% of antibiotics are not given to humans at all – they are given to farm animals.

Crammed together in minimal space and conditions that are hardly conducive to good health, the risk of infection is extremely high. Rather than wait for it to happen, farmers go wild with the antibiotics.

Livestock raised for food in the US are dosed with five times as much antibiotic medicine as farm animals in the UK.

These antibiotics help “growing animals to digest their food more efficiently, to get maximum benefit from it and allow them to develop into strong and healthy individuals”.

As a result, they are also used in animal feed as “growth promoters”.

So the farming industry has come to depend upon the drugs for both animal health and higher yields (more meat per animal), and it is fighting a vigorous campaign to maintain their use.

A company such as Anpario (AIM: ANP) could help solve this problem.

The firm sells an alternative to antibiotics to farmers across the world: natural feed additives that prevent and treat diseases in livestock: mainly for pigs, poultry and fish.

Definitely a company to keep a close eye on.

But what we urgently need is an alternative to antibiotics.

And there is one extremely promising avenue of research: phages.

Phage therapy began during World War 1 when a microbiologist, Felix D’Herelle, was tasked with investigating an outbreak of dysentery among French soldiers.

Curious about why some soldiers became gravely ill while others survived, he grew the soldier’s fecal bacteria in his lab.

In the bacteria from recovering soldiers, he saw these spots – patches of invisible microbes which seemed to be aiding immunity.

Phages, we now know, are viruses that devour bacteria.

They thrive where bacteria do – in sewage, open water, salads.

Billions of years of evolution have made them the ultimate bacteria killers. 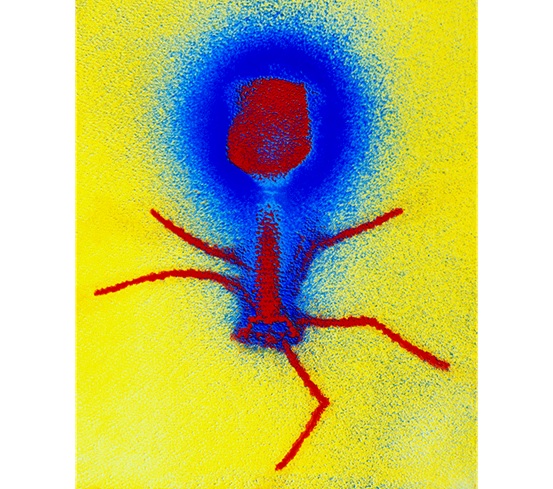 E. COLI‘S NIGHTMARE: This false-colour micrograph of a T4 bacteriophage (red)
shows a series of spidery tail fibers, which it uses to attach to and infect E. coli.

Phages start by recognising and landing on the right bacteria.

It lands, and then injects its DNA, creating copies of itself, producing toxic chemicals that rupture the bacterial host from the inside out.

Resistance is also much less likely to develop with phages because each type injects a specific type of bacteria.

In fact, hotdogs and sandwiches are routinely sprayed with Listex, a cocktail of several phages already approved by the FDA.

However, right now phage therapy is only used in isolated medical cases.

The problem is finding the right phage to battle the bacteria.

But that could soon change.

And when you consider the scale of the problem, there is potential for enormous returns.

This is not a magic bullet for the superbug crisis.

There are several problems with phage therapy that we will need to overcome.

1. Antibiotics work most of the time. And they are cheap. This means that the market is small (phage would be used only as second- or third-line therapy) and pricing power would be low.

2. Phage are intrinsically narrow spectrum agents. Not only are they restricted to a single bacterial species, but usually to a subset of strains within that species. Dozens of phage strains are thus needed to cover the likely sources of any given infection.

3. Phage are cleared rapidly from the bloodstream and provoke a response from the immune system. Using them for a systemic infection would be challenging, and you couldn’t use them a second time on a patient.

That said, this is hugely promising area of research.

And I’ll keep you up to date here on the most promising companies as we surely see breakthroughs in this escalating crisis in 2019.