Dire warning from the world’s most important economy 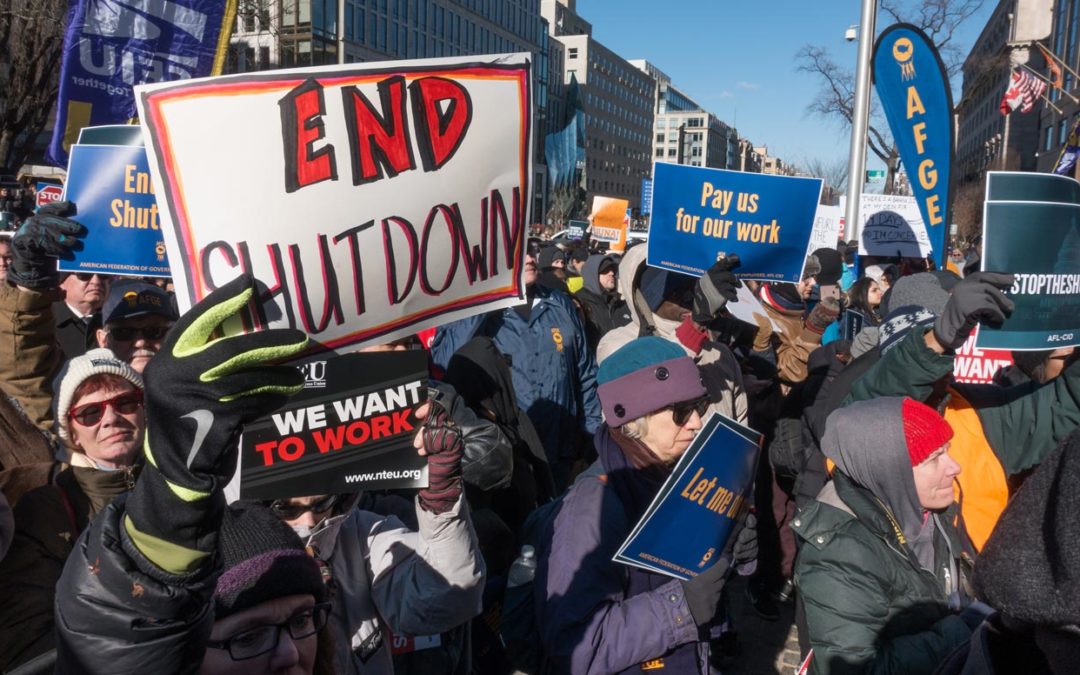 And there are very few signs of a breakthrough in the stalemate any time soon.

But given this week’s main news, the farce playing out in Congress is just a sideshow.

The world has a far bigger problem to deal with, according to new data from the IMF.

It’s a chilling warning from the world’s most important economy that things are about to get a hell of a lot worse for us all.

That’s not to underestimate the importance of what’s going on in America, by the way.

This shutdown matters, not just to the poor people stuck at home – or even at work – without their regular income…

And the longer it drags on, the graver the implications, not just for those guys… but for the rest of America and down the line, even you and me.

To recap, Trump wants $5 billion to fund The Wall. The Democrats won’t allow it.

So, Trump won’t sign off on the funding needed for a bunch of federal departments to function. Hence the unpaid workers.

That’s basically it. And neither side will budge.

Yes, there’s plenty of talk of reaching an agreement to end the impasse and get government employees back at their desks… and being paid.

And nothing’s come of it.

The End of Trump?

There are still some 800,000 federal workers going without pay.

Trump has showed his appreciation this week via his favourite means of communication, Twitter:

The irony of it is that here’s Donald Trump pledging to make America great again.

And for some time, his policies were doing well for him.

For example, US voters like the way he’s chopped away at Obama-era regulations. And it had a positive effect on business confidence and economic activity for a while…

And those multi-trillion-dollar corporate tax cuts he delivered shortly after coming to office boosted the stock market, at least.

Which is great for Trump’s chances of being re-elected for a second term if it comes to that (if he’s not impeached before the 2020 election).

But those tax cuts haven’t filtered through to creating new jobs. And the boost to the real US economy has been short-lived.

Look at the chart below – you can see where the tax cuts took effect in the first quarter last year, boosting business spending. 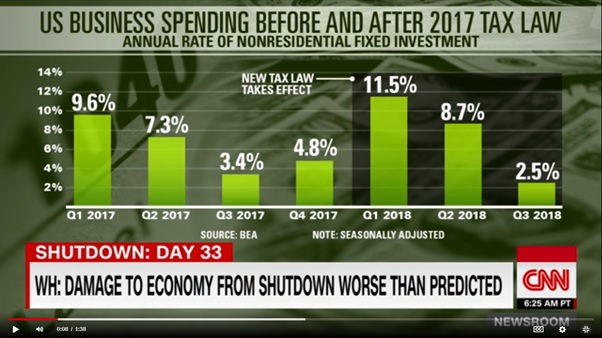 But ever since, the effect has ebbed away, as CNN reports:

“Business spending on things like factories, software and new equipment jumped in the first quarter after the tax law took effect. But it has decelerated as companies worry about slowing global growth and rising trade tensions.”

And at the same time, Trump’s wrecking the economy by cutting off income from almost million workers, wiping out billions in consumer spending.

The longer this carries on, the greater the dent in US – and global – economic growth.

Some economists are talking about first quarter growth being close to zero or even negative.

Compare that to the 3% growth Trump has been boasting about for most of his term in office so far and you see why it’s a problem – not just for the economy, but for Trump’s chances of a second term.

Could Trump’s stubborn stance on the shutdown in pursuit of The Wall end up, at least in part, causing his downfall?

Investors carry on regardless

Not that the stock market seems to care about it!

Have you seen the way the US indices are behaving this week?

It’s as though investors are ignoring what’s going on at the heart of the government of the most powerful country in the world.

They’ve been digging deep in their pockets and piling into stocks.

The Dow’s up some 5% over the past week.

The broader S&P index is about the same.

Maybe they know something you and I don’t know?

Or maybe they’re just back to their over-complacent ways – the kind that often crop up around market tops.

They should wise up, those investors… especially considering this week’s main development.

The world’s most important economy is in trouble.

On Monday, China released official data (if it is to be believed, which some doubt).
The ‘official’ numbers say that China’s economy grew by 6.6% in 2018.

Sounds great, doesn’t it – especially when you compare it to the growth figures we were looking at just now for the US.

But it’s when you consider that in 2007 China’s GDP growth rate was 14.2% that you realise the latest figures are on the low side.

And in fact, what we’re seeing is the slowest pace of growth for almost 30 years – since 1990.

CNN is on the story:

“Chinese growth has lost momentum following government efforts to try to rein in high levels of debt. It has also started feeling the effects of the trade war with the United States, which has resulted in new tariffs on more than $250 billion of Chinese exports.”

In fact, just about every indicator of China’s economic health is painting a miserable picture.

The catastrophic fall in sales for Apple’s iPhone and other gadgets as Chinese consumers stop upgrading their tech is well reported. Hence the 35% drop in its share price.

But this report from on the ground in Beijing on the Tribune News Service reveals other troubling stats:

“On top of Apple’s slumping sales here, car sales have plunged for the first time in 20 years. Property sales, housing construction, foreign investment, December imports and exports are all slowing. And the job market has gotten a lot tougher.

“Chinese policymakers are struggling to turn around the rapidly weakening economy, the world’s second largest, with growth in 2018 at its lowest rate for 28 years. And the government, showing its alarm, has been censoring bad news about the economy for months.

“A raft of bad financial data in recent weeks suggests the turnaround efforts so far have not worked, raising alarm about how bad things might get – especially if the trade war with the United States drags on. China’s economic woes, along with a worrying decline in European manufacturing, have sparked fears of a global slowdown.”

China may be the world’s second largest economy by GDP, as that report states.

But for so long, investors and economists have pinned hope on China as the country that could deliver miracle growth that would in turn ‘carry’ the world economy.

So, I’d argue that it’s a more important economy than any other…

If it continues to grow, its people will consume more.

That means it will suck in huge amounts of exports from countries around the world, driving the global economy.

But if growth continues to fall as it is now or – banish the thought! – even if it stops growing, then we’re looking at a potentially devastating global recession or even depression.

But the risk is there that in the next decade China becomes a real burden on the global economy.

The International Monetary Fund is concerned enough to share its thoughts at the economic conference being held in Davos this week.

“After two years of solid expansion, the world economy is growing more slowly than expected, and risks are rising,” IMF Managing Director Christine Lagarde said at a press conference in Davos.

“That does not mean a global recession is around the corner, Lagarde added. But the “risk of a sharper decline in global growth has certainly increased,” she said.

The IMF is concerned about developments in Europe. Germany and Turkey are showing noticeable weakness.

No doubt the troubles in Italy are a worry as well.

The threat of a disorderly Brexit is up there, too.

But the authors of the IMF report said:

“The slowdown in China, the world’s second-biggest economy, is of particular concern for world growth, with pressure from tightening financial regulations and US tariffs potentially snowballing into a more dramatic contraction that could “trigger abrupt, wide-reaching sell-offs in financial and commodity markets that place its trading partners, commodity exporters, and other emerging markets under pressure.”

It’s serious stuff when the IMF labels China as a major threat.

And what do investors make of it?

They rush out and by shares, of course!

“Nothing to see here. Global powerhouse in trouble? What of it? Out of my way! BUY! BUY!”

But there are little signs every now and then that there is some vague trace of concern from the markets, as CNN notes:

“The deteriorating situation in a market that businesses around the world rely upon for growth is having a widespread impact. It has spooked investors and prompted warnings from top companies like Apple.”

Let’s keep an eye on other major international companies that rely on the Chinese consumer to buy their products.

If there’s a whiff that sales could suffer due to the slowdown in China, we could see some stock prices getting smashed.

And that could end up being the trigger for investors in the wider markets to take fright… and for the next major leg down in stock markets to begin.

When that happens, expect gold to start moving higher – have you got some on board?

Portfolio “insurance” is on offer

By the way, when we talk about investing in gold, it doesn’t necessarily mean selling all your stocks and buying gold with all the proceeds.

You should think of owning gold as more of an ‘insurance’ policy.

It’s something that should add some stability to your investment portfolio in the event of a serious sell-off in the stock market.

We haven’t seen that sell-off yet. Only the start of it.

On Christmas Eve the S&P sank to a level that was -20% from the September peak.

In doing that, it set out its stall and said: “This is a bear market!”

What we’re seeing now is a not-very-confident bear market rally.

Investors are clinging on to every bit of positive news that comes out, shutting their eyes and buying stocks.

If the much talked about ‘Melt-Up’ in stocks is going to happen, they want in on it!

Which is fine if that comes along.

Maybe they’ll make a few percent on their money before the top is in.

But if markets collapse, then they may wish they had lightened up on the more speculative of their positions and banked their profits while they had the chance.

And at that point, they’ll wish they had some gold in their portfolio, too.