Why I’m back trading crypto this month

Trading cryptocurrencies is a frustrating business at times.

The market has gone through a series of manic episodes: surging 50% to 100% in a few weeks only to collapse again.

In between those episodes, there have been long months of tedium where I’ve sat on my hands, looking at my screens, just waiting for something interesting to happen.

This year has been good though.

Bitcoin has doubled since the bottom in March.

After the long boring winter, this is a sudden sustained lift in the market.

These last couple of months have felt a little like the last months of 2016, when the market suddenly exploded.

Some of the most heavily traded coins on crypto exchange Coinbase are up 50-60% in the last month alone.

Are we setting up for a big run in the market?

Back then, the big story was ICOs – initial coin offerings.

There were some excellent projects in this field. Many of us put a little money into those projects and hoped they would take off.

That didn’t happen for me.

Though I know quite a few people who made huge gains: enough to buy a home from a modest investment.

Sometimes, I kick myself for not getting involved during that early period of eye bleeding gains.

But equally, there are plenty of people who got burned during the 2017-18 collapse.

I remember listening to a friend on holiday in Greece, saying he had put £1,000 into a Chinese cryptocurrency coin that had made in him £100k in the last few weeks.

That stung, at the time. He seemed to know so little about how the technology actually worked.

But then the mania disappeared…

The Chinese regulators came hunting for crypto and that coin plummeted in value: all the way back to £1k again.

With cryptocurrencies, it can be hard to separate the good projects from the absolute nonsense!

The best guide to crypto and what he is saying now

Michael Mac, at Crypto Traders Academy, is my main guide on all things crypto.

What does that all mean for traders?

It’s good news for those of us holding Bitcoin.

Bitcoin smashed through both the horizontal $10.5k resistance and the triangle resistance around $9.5k (see chart No. 1). 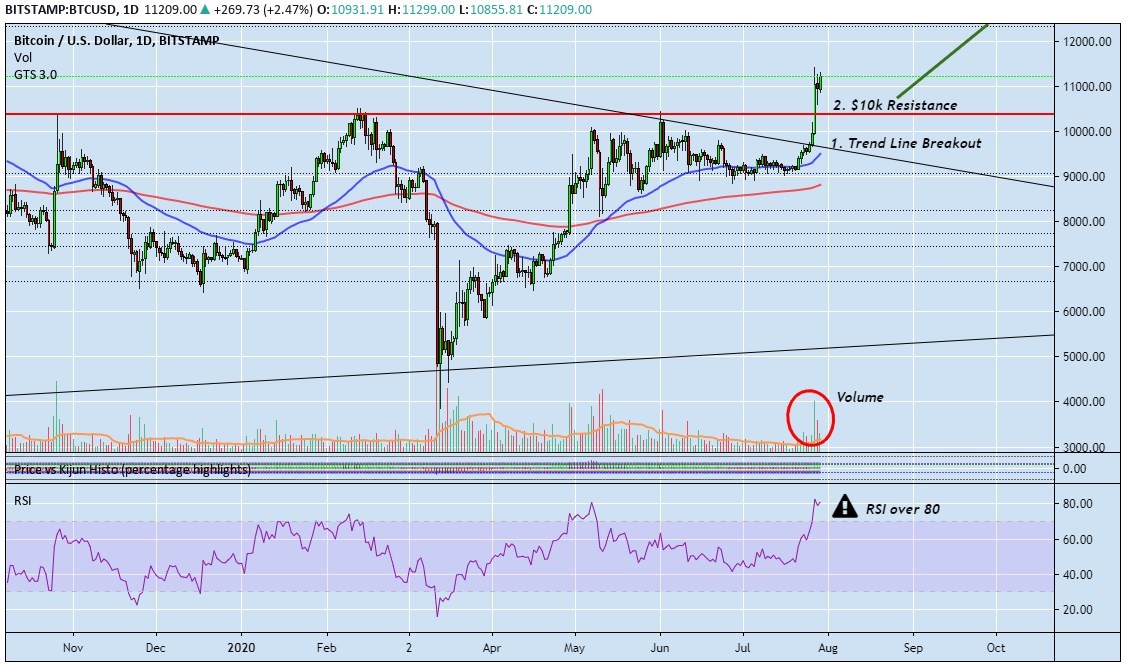 Bitcoin break through convincingly, reaching $11.4k, before setting around $11.1k.

As Michael points out, this points to the likelihood of this being another major breakout for Bitcoin…

“I believe the most likely scenario is that this is a potential starting point for the push to new all-time highs and beyond and we know once Bitcoin gets moving it can move fast.

From a long-term perspective, Bitcoin is also breaking out of a major symmetrical triangle which has been forming since 2017 which offers a lot of support for a major move up.”

Ethereum is on the move too. It has now increased ~300% since lows in March.

And that’s no surprise. The scale of what is being built on its blockchain is breathtaking.

Five years after its launch, there are around 200,000 active developers building on Ethereum, with some high quality crypto technologies being deployed right now which could be worth massive sums in the next decade including DeFi, Stable coins, Security Tokens, Proof of stake & new Blockchain Scaling Solutions.

These projects could really eat into many of the traditional activities of big finance. In the last two months alone, the amount of value locked up in DeFi protocols has shot up from $1 billion to $4 billion.

This article is worth reading for the contrarian view.

3. Alt Season: just around the corner

The real excitement for traders, however, is probably in altcoins.

These are the smaller high-risk projects that have the most potential for explosive gains.

Some altcoins are already outperforming Bitcoin

But if Bitcoin continues to consolidate at the current price level, we could see a new boom season in a whole swathe of coins.

This will bring huge volatility. Many coins will spike in price. If you know which ones to back, the gains could be superb.

According to Michael, we need have things before we can confirm a bona fide “Alt Season”.

1. Bitcoin in a steady uptrend. Verdict: Bitcoin has broken out about $10,400 and is holding steady.

2. Ethereum trending up against BTC. Verdict: Arguably we are there already or in the very early stages.

4. A prolonged accumulation period where price action trends sideways and a ‘price floor’ and reversal of trend on higher time frames is established. Verdict: Has already happened in 2020.

5. New narratives for extreme high valuations. Verdict: I believe this is now in place too, particularly with the rise of value locked in DeFi.

The more bullish the conditions are the more new alt coins I will be buying over the next month: some of them with the expectation of making 3-5x in the years ahead.

I am not sure if we will see 2017 type gains in crypto – the 10x to 20x gains that came with that particular manic episode.

If you are new to crypto or had a frustrating experience with these assets in the last few years, I’d urge you to dip your toes back in.

There is an excellent website called Decrypt: which has a selection of primers on the most tradeable coins in the market. This article on Ethereum, spells out the base case for investing and trading ETH.

If you are a masochist, you can also check in each day on Coinmarketcap and see what gains you are missing out on.

And if you are looking for guidance on what altcoins to buy, and when, then now is definitely a good time to take a free trial of the Crypto Traders Academy.