I’m talking about the law of supply and demand.

And the effect on price when one outstrips the other.

When something’s scarce and people want it, demand is greater than supply.

And that makes the price go up.

You see it with the price of commodities like oil.

When big oil producers like Saudi Arabia limit supply, we get a move higher in the oil price.

When lots of investors think it’s smart to hedge their portfolios by buying gold, the price of gold goes up.

And then there’s Bitcoin, the clearest of all displays of market forces in action in recent years…

Demand has gone through the roof as more and more people have bought in.

And that’s sent the price of Bitcoin higher.

This week we saw Bitcoin smash through the psychologically important $10,000 level and even push as high as $11,115 before settling back around the 10K.

I was talking to a friend yesterday about that.

He didn’t get why Bitcoin’s acting like it’s running out.

And he’s not alone.

How can “a bit of code” be scarce?

I guess it’s simple to understand why natural resources like oil and gold react to rising demand.

There’s only so much in the ground.

But it’s harder to get your head around with Bitcoin. “It’s basically a bit of code, right?”

I had to explain to my friend that the supply of Bitcoins is limited.

Just like the supply of oil and gold is.

The 21 million coin-limit written in to the project from the start creates the scarcity value.

That’s the total number of Bitcoins that can ever exist.

Add in big demand and… BOOM!

Economics kicks in and the price goes higher.

This market is Bigger than Bitcoin

But there’s HUGE and growing demand for it.

In a way, far more demand than there is for Bitcoin.

I know Bitcoin made headline news as it burst above the $11,000 level earlier this week.

It even got a mention from a bemused John Humphrys on Radio 4’s Todayprogramme on Wednesday.

But there’s still relatively few people who know much about Bitcoin, let alone deal in it and want to own it. (It’s still not what you’d call mainstream, not yet.)

This other commodity I want to talk about though…

Everybody wants a piece of it!

Even if it’s not making headlines – it’s in huge and growing demand.

And that means it’s been rising in value.

In fact, some people call it the world’s most valuable commodity.

I’m talking about YOU.

Or to be more specific, your ATTENTION.

Indeed, economists and cognitive scientists say we are now living in THE ATTENTION ECONOMY.

Matthew Crawford – author of The World Beyond Your Head, sums it up perfectly…

“Attention is a resource — a person
has only so much of it.”

We’re back to demand and supply again.

Right now, you are surrounded by social media platforms, retailers, marketers, and news organisations that are desperately trying to get and hold your attention.

They get rewarded on how successful they are at capturing your attention either direct from your wallet or by selling off your attention to advertisers.

While Apple manufacture products (like the iphone) that are designed to keep us primed and accessible to the ‘attention merchants’.

And it’s not surprising we’re seen as a great opportunity.

See, we’re so free and easy with our attention…

It doesn’t take much for someone to distract us from whatever we are doing.

While it may not seem like a big deal, there is a growing realisation that it is having a significant impact on productivity.

Which is bad news for employers wanting a decent day’s graft from their staff.

That’s the implication from a recent post on Bank Underground, a blog run by staff at the Bank of England.

Dan Nixon, author of the post, talks about a ‘crisis of attention’ facing global society.

It’s not a new idea.

In this 2008 Prospect article, the author bemoans the behaviour of students at Columbia University as their minds wander:

The students flipped open their laptops and started clicking away.

A few solely took notes, but many flipped back and forth between multiple windows: shopping on Amazon, cruising Facebook, checking out The New York Times Style section, reorganizing their social calendars, e-mailing, playing solitaire, doing homework for other classes, chatting on AIM, and buying tickets on Expedia…

Was it just a random day, a random classroom, a particularly restless group of college students?

Or was it a profoundly sad statement about the state of our distracted minds and the biggest challenge facing all of us in this 24/7, high-tech time: the crisis of attention and intention?”

Nixon translates this phenomenon from the lecture hall to the workplace and considers the impact on productivity.

He suggests we’re more distracted than ever (almost 50% of the time, according to one study), because of the fierce competition for our attention from all around us.

But once it did, it didn’t take long for it to become the main method of communication…

Between colleagues, external contacts, anyone you needed to communicate with to get the job done.

And soon enough, emails came so thick and fast that they became a major distraction.

You’d have to shut down your email just to focus on your work!

As Nixon points out, there are so many more distractions today.

Smartphones have opened new channels for the attention-grabbing hordes.

I read earlier that an average smartphone user in a recent behavioural study touched, swiped or tapped their phone 2,617 times a day!

But it’s a clue as to how much attention we give our gadgets.

Of this won’t necessarily apply to you.

But for some readers, it will strike a chord about how intrusive a smartphone can be…

Smartphones and social media are stealing your attention

You’re getting messages coming through from Twitter or newsfeeds, social media, price alerts on your trading platform…

All dragging your attention away from what you should be doing: focussing on your job and producing stuff.

“The intuition is simple enough: our minds comprise the bulk of our human capital and what we direct our attention towards is integral to the ‘output’ of our mental activity. You would therefore expect the ability to pay attention to be a key input into productivity.”

So is there a correlation between the proliferation of smartphones and levels of productivity?

I think you know the answer!

And Nixon presents a chart to show it: 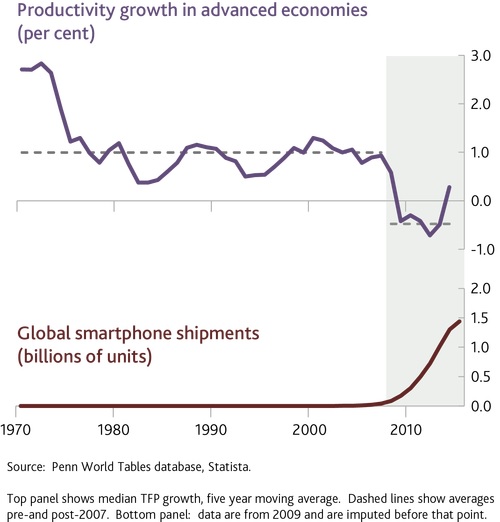 There certainly seems to be a connection, doesn’t there?

Smartphone use has exploded in the last decade, while total factor productivity (how efficiently inputs are used in the production process) has been weak.

I don’t think you can lay the blame squarely on smartphone use and distraction.

There’s plenty of analysis that points to global productivity still suffering from the 2007/8 financial crisis.

But I can see this plays a part.

So how exactly does all this distraction weigh on productivity?

First is the direct impact such distractions have on the amount of effective time spent working.

Statistics for the US suggest people spend an hour of their work day on social media, presumably in little bursts. It’s even more (almost two hours) for millennials.

As for shopping sites, a survey revealed that there is a surge in traffic between 2pm and 6pm on weekdays (when people should be working).

That’s bad enough in terms of time away from the job. But it gets worse.

According to one study, it takes 25 minutes to recover from a distraction and get back up to speed.

And according to Nixon, “distractions can directly reduce the quality of our work. An influx of emails and phone calls, for example, is estimated to reduce workers’ IQ by 10 points – equivalent to losing a night’s sleep.”

Right then, you know what to do, guys. Turn off your smartphones and close your emails. (Wait, you can finish reading this one first!)

OK, so that’s the first way all this interruption can affect productivity.

In other words, letting being distracted become a bad habit.

Nixon believes that smartphone apps, websites and social media are designed to ‘hijack’ our minds and make us addicted to what they’re peddling.

As one example, he mentions “the bottomless scrolling newsfeed, which is designed to make you want to scroll further in case something good turns up. The psychological mechanism at play here – “intermittent variable rewards” – is the same as the one that gets people hooked on slot machines…”

And once we form bad habits, they stick.

Let’s say you’re distracted by smartphone notification and have a peek.

That costs time (and money).

But the deeper problem is that you’re likely to get side-tracked again, rather than finishing the task you were doing.

Of course, none of that’s good for business.

It lowers productivity, leads to missing deadlines and hits your bottom line profits.

I don’t think it’s all bad.

It’s not like every time you pick up the phone at work, you’re squandering time reading your friends’ social media updates.

A lot of the best news stories and ideas I read come from Twitter. And in the work place all that can be put to good use.

But there’s no doubt about it, a constant barrage of sales offers, news and entertainment can get in the way of what you’re supposed to be doing…

Whether that’s writing an eletter, analysing data or figuring out the key levels on the trade you’re looking to place.

Maybe it’s best to just shut out the noise… and keep some of that valuable attention for ourselves.