Did you hear that cracking sound?

Can you remember what you were doing on Friday 2nd February 1992?

It would have been something mundane. Like processing insurance applications. Or underwriting life assurance policies.

The day-to-day grind of an insurance clerk, as I was back then.

Nothing out of the ordinary sticks in my mind, put it that way.

But things weren’t so humdrum for 24 men who’d gotten together in a Dutch government building to make some history.

History in the making

So were representatives from nine other countries…

Scrawling their signatures on the document that marked the birth of the European Union and ultimately the euro.

The Maastricht Treaty was supposed to create a utopia for the 12 member countries.

After centuries of bloody European wars, it was a chance for nations to work together in peace for their common good.

Love thy neighbour and all that. Unity, integration, freedom of movement between member states. That was the dream.

But as you know, it’s never quite run smoothly.

And now, with chaos in Italy and markets reacting violently, more than ever before it looks like the experiment is imploding before our eyes!

A tough time from day one

Right from the get go, the ‘European Project’ has divided public opinion.

Even after it was signed, the Danish people rejected the Maastricht Treaty in a referendum.

In a second vote the following year, they accepted it, but only after getting an opt-out of monetary union (like the UK).

The French also very nearly rejected it, with just 51% of the public voting ‘OUI’. And in Germany and the UK, there was huge public distrust… and still is.

When Brits voted to leave the EU in the June 2016 ‘Brexit’ referendum, it rocked the financial markets.

And sterling lost 11% of its value within minutes and as much as 21% over the following weeks.

Four years before that, world markets had been hit by Greece’s near exit from the euro.

Eurozone bond yields went through the roof as traders panicked about mass defaults.

And the gold price soared $200 or 12% as capital rushed to find safety.

It was only European Central Bank President Mario Draghi’s pledge to do “whatever it takes” to save the euro that calmed things down.

As the Sydney Morning Herald explains:

“The ECB response to the Grexit threat was to embark on a massive program, purchasing the bonds of weaker countries of the eurozone and granting a series of bailouts for Greece in return for promises of financial discipline.”

And fair play to “Super Mario” … things did get back to normal after a while.

With interest rates near zero and the ECB buying billions of dollars’ worth of bonds, crisis was averted.

But let’s not get too relaxed…

We’ve only seen the prelude so far

You can’t have missed it.

This week there’s been more bloodshed in financial markets.

And when you consider that Italy’s economy is 10 times larger than Greece’s, you can see why markets are nervous.

So, what’s going on?

It’s quite complicated. But let’s keep it simple.

In fact, it’s nothing we haven’t seen before.

The rise of populist politics. And the fight between the establishment and those seeking to overturn it.

Italy’s largest political party is the populist 5-Star Movement. It’s strongly against the idea of the EU. And against immigration.

In the recent Italian elections in March, 5-Star won the most votes of any party. But not enough to form a government on its own.

So, it teamed up with far-right party, the League.

They don’t see eye to eye on everything. But both parties compromised on the other’s more extreme policies.

And last week they looked to be on the brink of forming a ruling coalition government.

Then it all went wrong…

In Italy, the President, Sergio Mattarella, must approve any program for government and nominees for key positions. As Business Insider explains:

“All was going well until Mattarella got to the two parties’ nomination for finance minister. The coalition had put forward Paolo Savona, a highly eurosceptic economist and former banker who was minister of trade and industry in the 1990s.

Savona has frequently advocated that Italy leave the euro, describing the single currency in a recent book as a “German cage.” He has been highly critical of Germany in particular, saying in the book that “Germany didn’t change its idea on its role in Europe after the end of Nazism, even if it abandoned the idea of imposing itself militarily.”

He also claims that Italy’s decision to join the euro back in the 1990s has “halved Italians’ purchasing power.”

Well, that was never going to sit well with the Europhile, Mattarella!

Of course, he rejected Savona as finance minister.

And with that, the chances of Italy getting a ruling government any time soon were dashed.

What this means for the Euro project

Of course, a lot can happen in a week.

And the political situation in Italy is changing minute by minute.

But what’s clear for now is that the Euro project is looking weaker than it ever has in the 26 years since Maastricht.

And Italy is part of the problem.

Never in their worst nightmares would the original 24 men who signed the Maastricht Treaty have seen this coming.

Italy’s one of the big players. The fourth-largest economy in the group after Germany, the UK and France.

And one of the longest standing, too.

It was one of the original five members who set up the European Coal and Steel Community (a kind of fledgling EU) back in 1951 – 41 years before Maastricht.

The thought of Italy being a catalyst for the break-up of the European Union was unthinkable.

But this week it’s EU public enemy no.1.

(And 2/1 favourite at the bookmakers to be the next EU country to leave the club.)

And you can see the fear showing up in Wall Street Journal chart of the yields on Italian bonds: 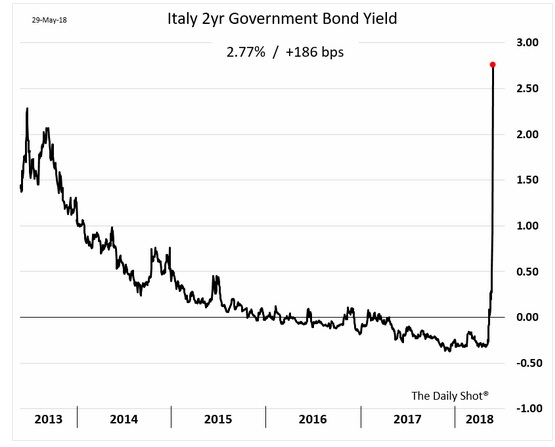 So that massive spike in the yield is because investors have been dumping bonds… worried the country could default on its huge debt obligations.

Whatever happens by the time you read this, we need to take the events of the past week as a sign of things to come.

A bigger shock to the system

There are 28 members of the EU. And there’s a rising tide of disillusion among those countries’ citizens.

Who knows which could be next to send shockwaves through the markets?

We’ll have to wait and see. Just be aware of the threats before you pile into the riskier end of the stock market.

Markets are on tenterhooks. And as you know, markets hate uncertainty.

We’ve seen this week – and numerous other times – any ‘shock’ news can cause BIG, asymmetric moves in the markets.

With markets having calmed since the start of the week, the reaction to a nasty surprise will be even greater.

Our old friend gold has bounced off trendline support and been creeping higher this week.

If things get worse in euroland, we can expect it to mount an assault on the recent highs, as stock markets collapse.