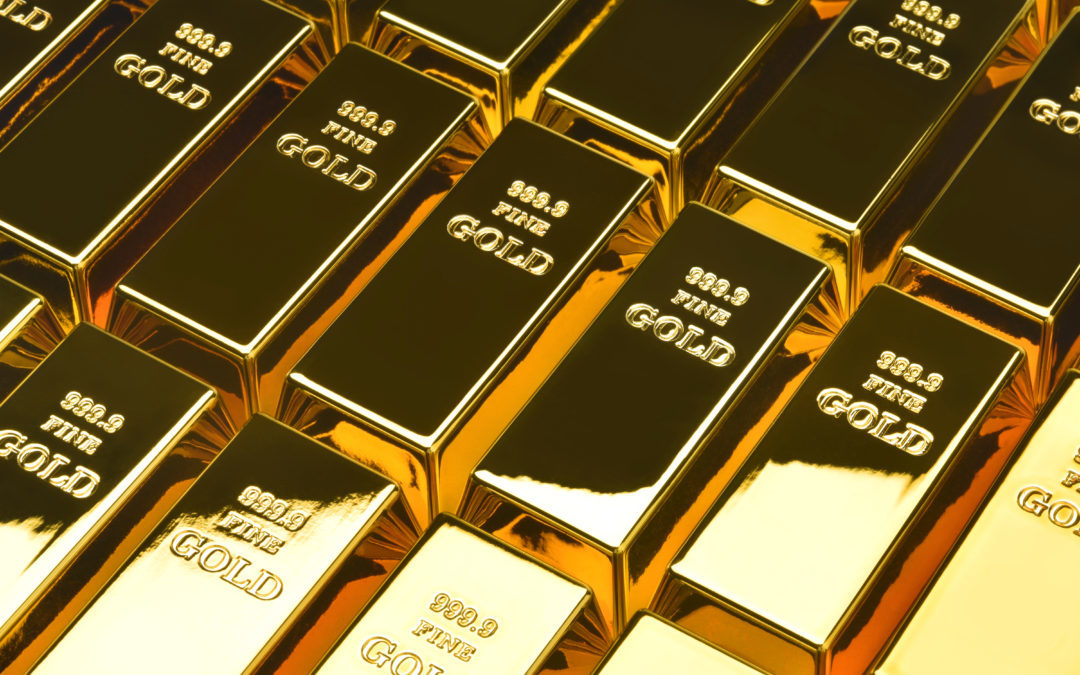 We spend a lot of time in Monkey Darts talking about why it’s wise to own gold.

Because there’s a worrying perception among many investors that stock markets only ever go up.

Even in the face of mounting threats to world economic growth and stability.

In a world like that, and if you want to keep some chips on the stock market table, it makes sense to hedge your bets.

And gold fits the bill.

The rationale for gold is that it should hold value if the ‘unthinkable’ happens and stock markets crash.

Most of the time, nothing really happens in terms of gold’s price.

It sits there, going up a little, down a little, but not making any major headway from week to week.

But when you zoom out a bit, you’ll soon see that gold has had a decent couple of years.

And this week’s price action in gold could be significant.

Especially when you look at it in dollar terms… something big could be happening.

When measured in most other major currencies, gold has been trading at record highs for a while.

In dollar terms, it hasn’t… yet. But it’s coming.

Here are some 20-year charts, starting with gold priced in sterling: 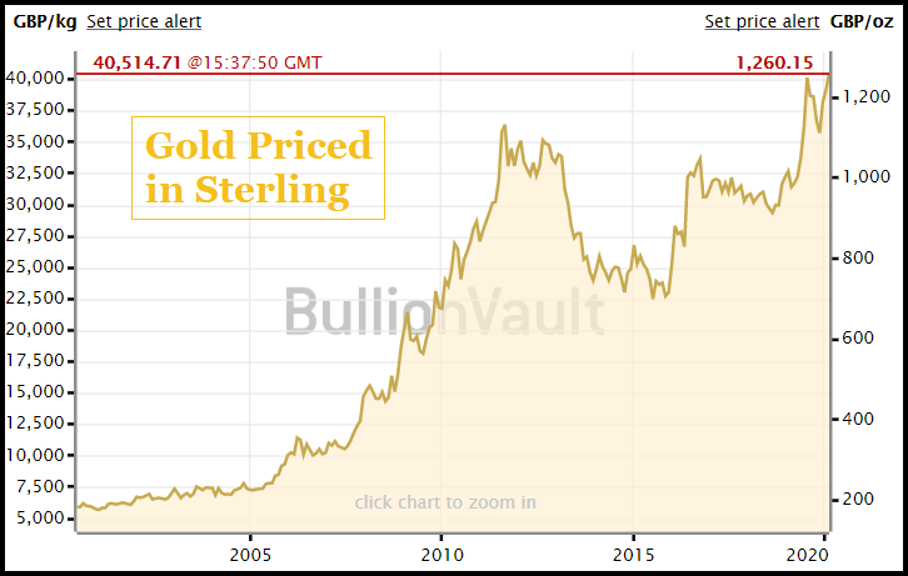 And here’s gold priced in Euros: 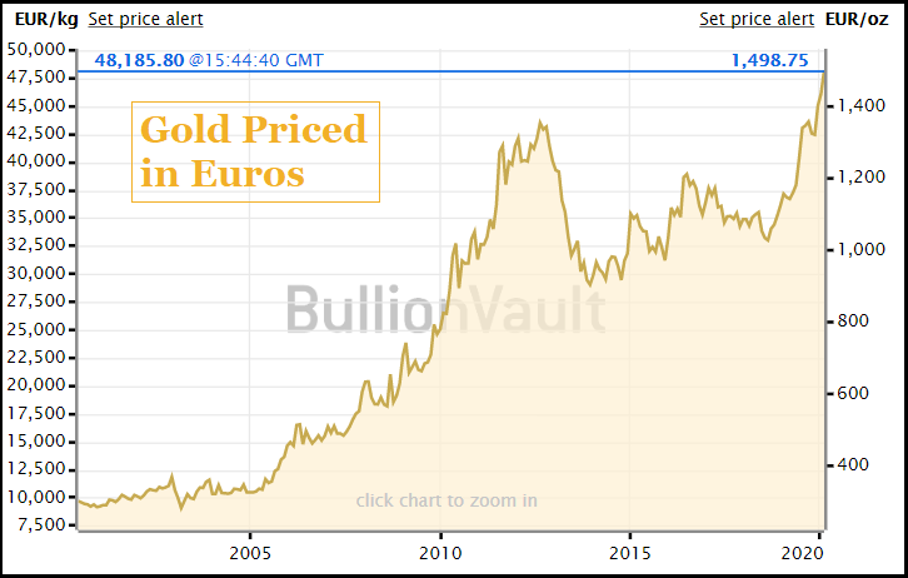 And in Japanese yen: 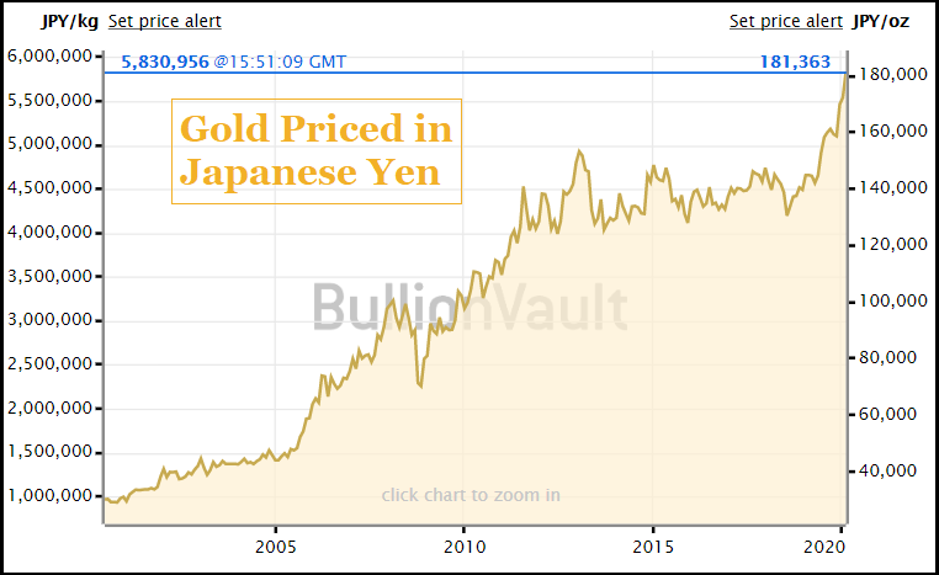 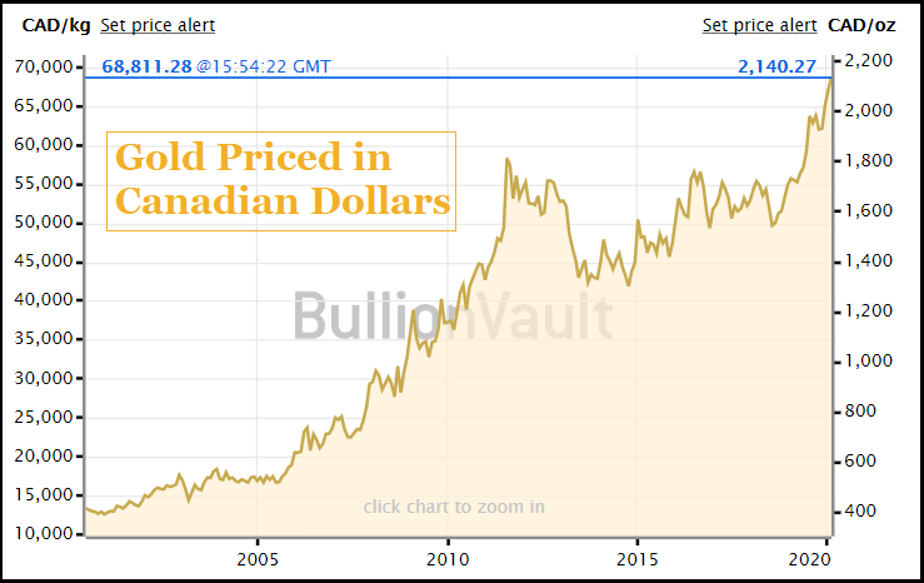 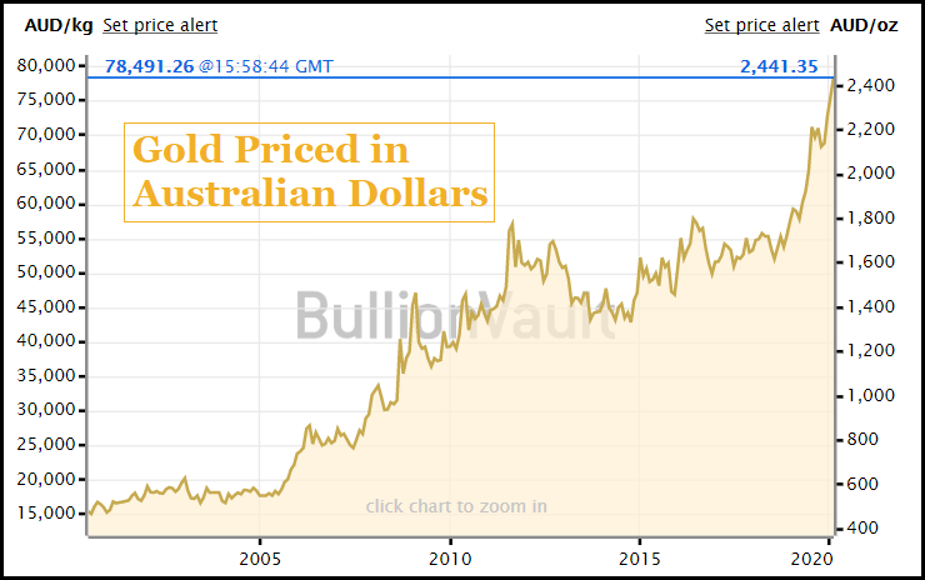 And lastly, in Swiss francs, where gold hasn’t quite taken out the all-time high set in August 2012… but is getting close: 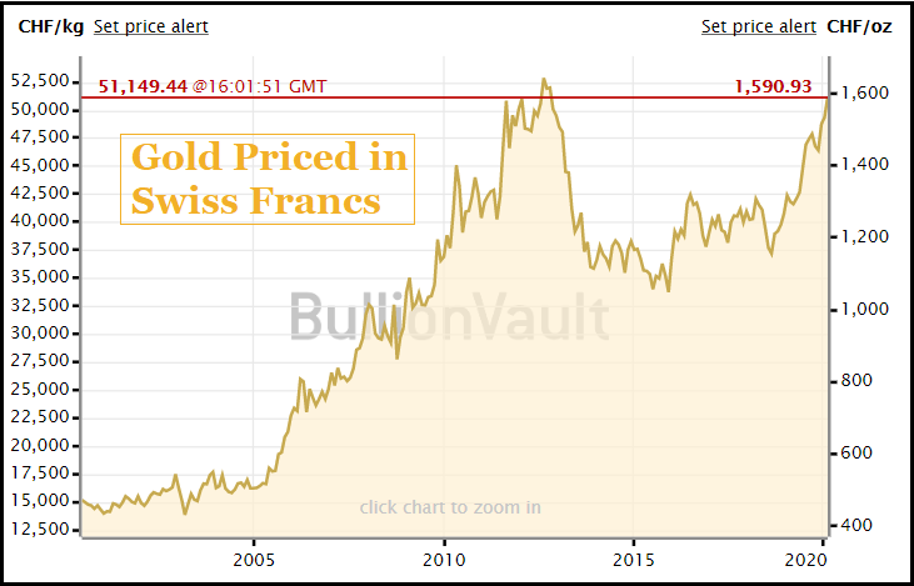 You get the point.

All around the world, there is a flight into gold.

The price hasn’t reached a new all-time high in terms of the US dollar yet.

But it could be on the cards soon… following significant price action this week.

Here’s the chart of gold priced in dollars… 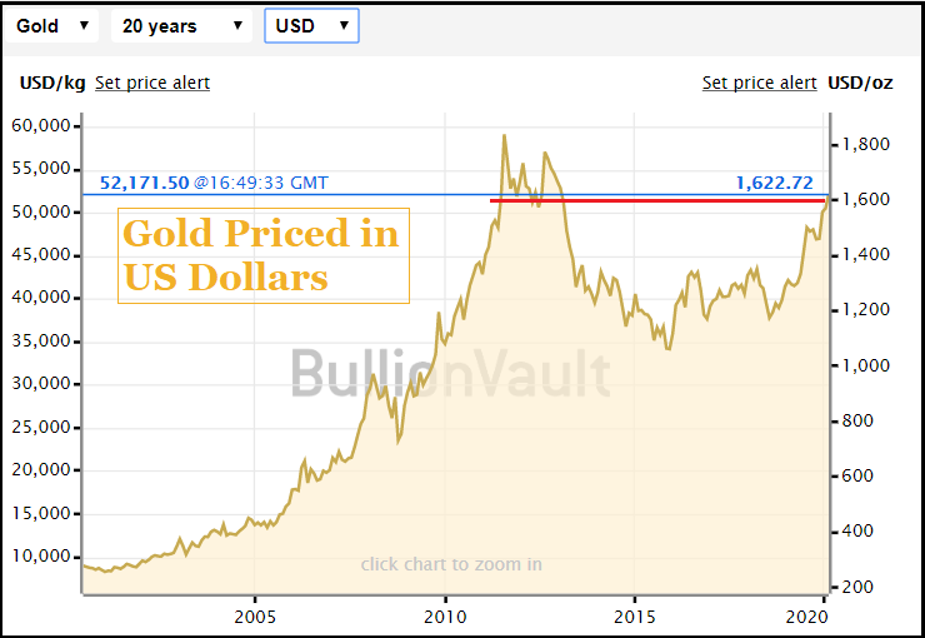 This week, gold broke above $1,600 for the first time since February 2013, marked by the red line on the chart.

It’s a break of a chart level that could have put up at least some resistance, given how long it’s contained the price.

But instead, the price sliced straight through the level, pushing as high as $1,623, as I write this on Thursday afternoon.

I wouldn’t be surprised to see the price dip back down to the $1,600 level in the coming days (it might not, but it could).

Often that’s what happens after a significant level is broken to the upside. Sellers will attempt to push the price back down to ‘test’ the breakout level.

If the selling pressure is stronger than the buying pressure, the price can move below. So, it’s a failed breakout.

But if gold can hold above that $1,600 level on a weekly close, it will be another bullish sign.

We’ll have to see how it plays out.

But you may be wondering, why the surge?

Gold senses there’s going to be rush of liquidity hitting global markets that could spark off a rise in inflation.

It’s already happening – and there could be a lot more coming.

China’s panicking about coronavirus and pumping cash into the economy to keep it running.

“Gold prices broke through what chart analysts had called “strong resistance” at last month’s spike to $1611 per ounce in London trade Thursday, rising $7 higher as Asian and European stock markets rose after world No.2 economy China cut its key interest rate in a bid to support businesses hit by the continued coronavirus shutdown and mass quarantines.”

Against the dollar, gold is still significantly below its highest recorded level, set on 22 August 2011.

Back then, the US Federal Reserve’s interest rate (the Fed funds rate) was at zero and had been since the Global Financial Crisis in 2008.

You can see that on this chart from SunshineProfits.com: 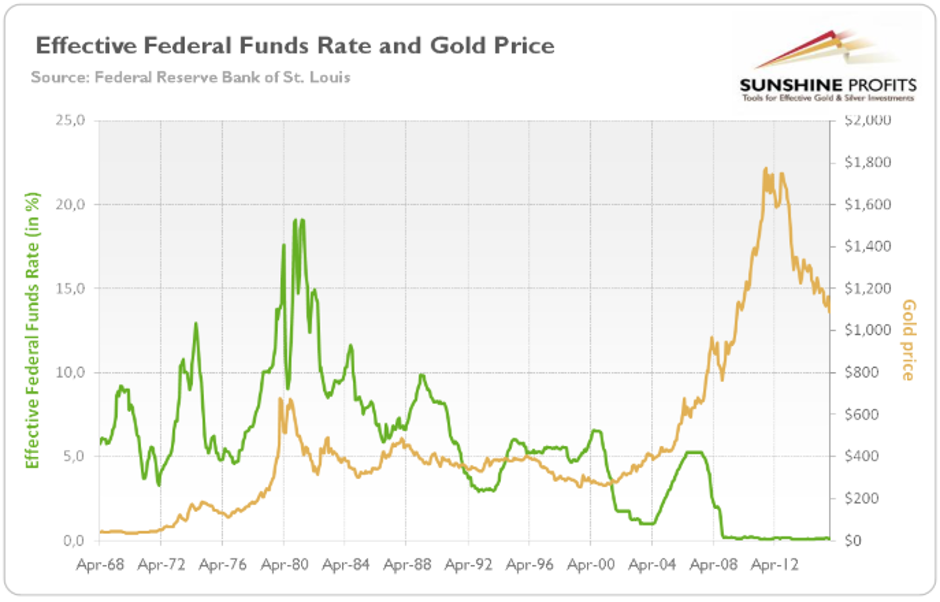 To the right-hand side of the chart, you can see gold’s peak happened when rates were near zero.

And now, central banks around the world are slashing rates again… to zero and in some cases below (Japan and Switzerland).

China’s central bank is the latest to announce a cut.

And I don’t think it will be long before the Fed drops rates again in the US, to tackle falling global growth due to coronavirus. (Even if they’re not admitting it’s part of the plan.)

Especially if Donald Trump gets his way and piles the pressure on Jerome Powell to turn the taps on.

There are signs that traders are betting on a cut, as Bloomberg reported yesterday:

“U.S. government bond markets saw a rush of buying Thursday that piled up bets on interest-rate cuts amid concern that the coronavirus will damage global growth.

“Increasing anxiety over the toll and spread of the virus appears to have contributed to the momentum in trades that took the 10-year yield just shy of 1.50%, to the lowest since Jan. 31. Expectations for further easing by the Federal Reserve ramped up quickly, with fed funds futures at one point pricing in as much as 45 basis points of easing by year-end. A day earlier, the market saw a quarter point cut and 50-50 odds of another.”

With rates on the floor, gold is attractive

All of which makes gold more attractive to investors.

After all, in a normal interest rate environment – with rates at, say 4% or 5% – people park their money on deposit and collect the interest.

Or if they want to beat that 5% yield, they invest in the stock market.

What they don’t do is put it in gold.

That’s because gold pays you nothing in terms of interest or dividends.

And it costs you to store it.

But when rates are low – and heading lower – suddenly gold becomes more attractive.

Combine that with coronavirus fears and we have a catalyst for a big move in gold.

“The gold price jumped to a fresh near 7-year high on Tuesday as worries about the global economic impact of the coronavirus mutated into expectations of massive monetary stimulus to counteract the damage done in China and elsewhere.

“Gold thrives when policy is loose and money is cheap, and usually moves in the opposite direction of interest rates. China is expected to pump billions into its financial system to revive its economy post-outbreak, and most developed economies never emerged from the ultra-low (or negative rate) environment of the 2008 global financial crisis.”

This week’s decisive move back above $1,600 could be just the start.

Peter Spina from GoldSeek.com told MarketWatch there are “many positives” for gold right now.

“The latest is that now 100% of the US Treasury yield curve is now negative yielding, if you now take inflation into account. Negative real yields with falling rates is more fuel to gold prices heading, eventually, to record highs in U.S. dollar terms.”

Meanwhile, analysts at Citibank predict the dollar price of gold could hit $2,000 over the next year.

They further made the point that gold net long positioning is at only half the levels of the 2011 peak.

Although there is plenty of investor inflows and central bank buying, there is scope for a lot more.

My bet is that now gold has broken up through that $1,600 level – and if it holds above it on a closing basis – there’s going to be a lot more money sniffing around.

According to Brien Lundin, editor of Gold Newsletter, quoted in MarketWatch, the markets are in “the throes of a weird mix of safe-haven and speculative motivations”.

“The U.S. dollar and stock market are benefiting from an influx of global funds looking for security during the coronavirus uncertainty, but stocks domestically and worldwide are also joining gold and silver in expectation of central bank stimulus to counteract whatever the economic effects may be.”

“So, for now at least, fear and greed are combining to move most markets higher.”

Of course, as the editor of a newsletter about gold, Lundin is going to be talking up the metal.

But his rationale make sense.

As for his predictions, he believes gold will go further than where Citi and other analysts are targeting.

Lundin believes “gold will do far more than beat that record.”

MarketWatch: “Adjusting for inflation, in order to match the record of $850 set in January of 1980, gold would have to trade for about $2,805 in today’s dollars, he said.

“I think we’ll set a new record in real terms, exceeding $3,000, at some point over the next four years or so.”

We don’t know when the stock market will finally top out. Or whether it will come crashing down. (Although I suspect it will.)

But if you hold some gold as part of the portfolio mix, it could well stand you in good stead if stocks do come down to earth with a bump.