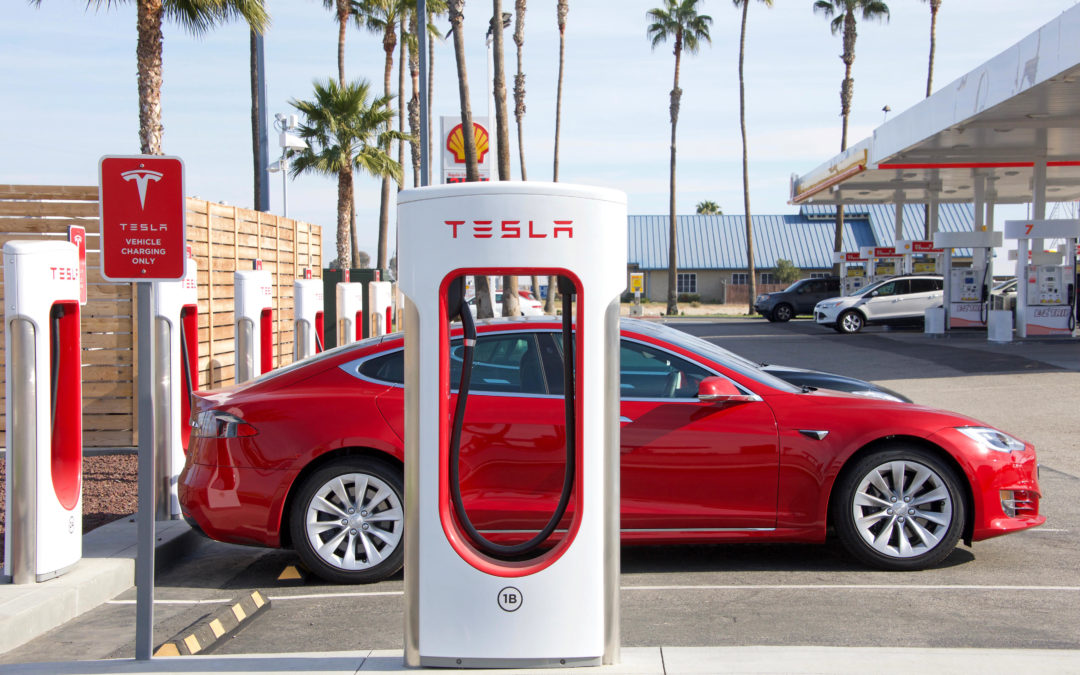 One of the shares that has been hit hardest during the stock market rout is Tesla.

Peak to trough, the shares have fallen 60%.

And many analysts are saying the worst has yet to come.

Tesla has now closed operations at its two main car factories in the US. And if these factories remain shut for the next few months, the company could start burning through cash.

With losses mounting and production delayed, Wall Street could turn on Telsa.

Ok, Musk could manage to jump start up operations in a few months, with a bit of luck.

But who will want to buy a luxury car in the middle of an economic recession?

And why pay more for an electric vehicle when oil is so cheap?

In fact, one Motley Fool article has laid out the whole story of how Tesla might go bust from here.

It’s a rough time for Tesla.

But the strange thing is that this might actually be a good time to invest in Tesla.

If you are a contrarian investor by nature, you’ll be looking for opportunities, even as panic is running wild in global markets.

You might be looking at the massive drop in share prices and wondering if now is a good time to invest?

As you can see from the chart, Tesla is right back to where it was last year before it set off on an insane surge. 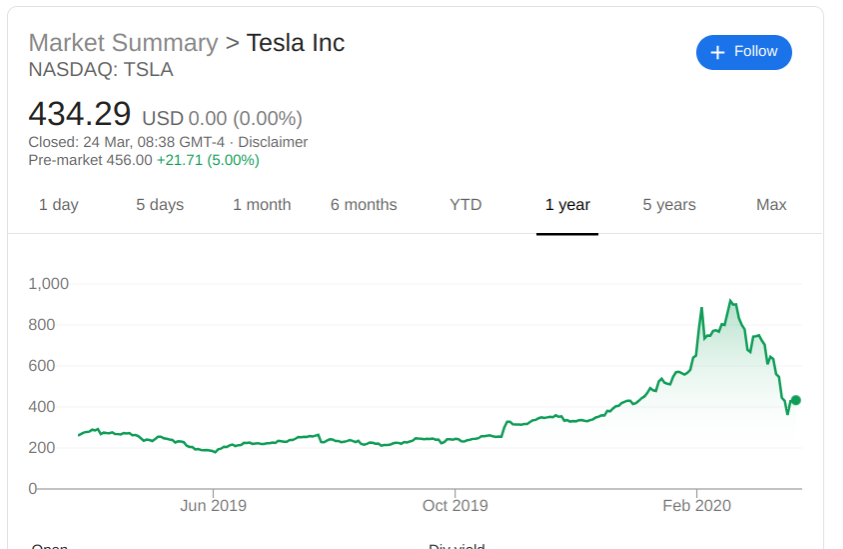 Could it fall further?

And we might be approaching the point of maximum pessimism for this stock.

The very rational fear is that the virus will require social controls in the US which prevent factories from reopening for months.

And for Tesla, even a short closure will wipe out revenues for the year.

But I would make three points here.

The company has raised $13.4 billion in debt and finance leases, and billions more from the sale of shares to fund operations.

Secondly, the plump protection team in the US seem to be preparing an absolutely massive stimulus to see the economy through the next few months.

(Obviously that creates its own problems. As Alex pointed out in the last issue of Monkey Darts, if central banks and governments keep on throwing money at the markets to try to fend of deflation and an economic depression – which they WILL – then sooner or later inflation will let rip…and then gold is going to really shine.)

And thirdly, Telsa could actually emerge from this crisis in a better shape than many of its competitors, especially in the car industry.

Let me explain why…

Can we trust this man?

A lot will depend on Musk himself.

This is a man who massively divides opinion. He has been called a braggart, a loud mouthed bully and an epic over-promiser.

He is quoted as saying that his goals in life are:

So yes…it’s easy to see why he upsets people.

In fact, many people think that his company is a bubble and that it’s all going to come crashing down around Musk.

But I’m not so sure about that.

Musk has an impressive track record of delivering in the face of improbable odds.

When Musk started SpaceX and Tesla he thought their probabilities of success were “a fair bit less than 50%” but, he says, “they needed to get done. So even if the money was lost – his own, shareholders’ and governments’ – it was still worth trying.”

Ashlee Vance, in his biography of Musk, argues that the key to his success is that he adapted the Silicon Valley startup culture to industries that have been insulated from serial disrupters.
He has changed the economic model of every industry he enters.

And he has done all this on a tight budget.

With little money to play with his companies relied on moving fast and releasing products in rudimentary form, and perfecting later.

And before the COVID-19 crisis, it was working.
In truth, a lot of the leading car manufacturers in the world are playing catch up with Tesla.

“Tesla struggled mightily to deliver the Model 3 with numerous setbacks and stumbles, but eventually the company figured things out and started shipping Model 3s in volume and has shipped 400,000 vehicles thus far.

Nobody really expected that Tesla would be able to ship 400,000 Model 3s by 2020, especially the European auto manufacturers. So much so, that both Mercedes and BMW have had significant shakeups including layoffs in the case of Mercedes and replacing the CEO in the case of BMW.”

Tesla are also producing cars with computing systems that are far more sophisticated than their competitors, says Moorfield.

“Tesla has effectively built a software-defined vehicle that is a constantly living and breathing platform that will evolve with the needs of users and Tesla’s roadmap over time.”

As this technology matures, all Tesla vehicles will have the hardware necessary to be fully self-driving with fail-operational capability, meaning that any given system in the car could break and your car will still drive itself safely.

And even as their cars are improving, the cost of production could continue to fall over the next five years if Musk can continue to develop cheaper, more efficient car batteries.

Tesla recently added CATL to Panasonic and LG as its battery suppliers.

The CATL move is especially interesting because the company seems to have found a way to boost the energy density — key to the range of EVs between recharges — of lithium iron phosphate batteries.

These batteries last longer than lithium-ion batteries, don’t catch fire and because they don’t use cobalt are cheaper than their lithium-ion counterparts.

So if the energy density matter is addressed, this could be great news for Tesla, especially when you consider the cost of producing a car powered by an internal combustion engine.
In the last five years or so, the auto industry has invested more than $14,000 in fixed assets for every car produced per year.
With a fraction of the moving parts, electric vehicles should be manufactured much more efficiently than gas powered cars.
Ford and other automakers have suggested that EVs could be produced at 50% of the capital investment necessary for gas powered vehicles.
Tesla’s first Gigafactory opened in 2016 in Reno, Nevada.

In time, the massive facility will manufacture 35GWh of battery cells and 50GWh of packs per year, all with renewable energy.

Production at the gigafactory will likely slash the cost of batteries by more than 30%.

Construction on a new Gigafactory in Berlin is likely to face delays.

But Tesla Gigafactory 3, located in Shanghai, could soon start scaling up production, allowing Tesla to focus on the next phase of its Master Plan— expanding its line of vehicles.

This includes a new line of heavy-duty electric trucks and vehicles for shipping goods, in addition to passenger sedans and SUVs.

That’s a hell of a question.

Even the most bullish research on Tesla, published by Ark Invest, has a bull case where Tesla is worth $15,000 and a bear case when the shares are worth $1,500.

Those prices, as you can see in the table below, are based on huge sales of Tesla vehicles over the next few years. 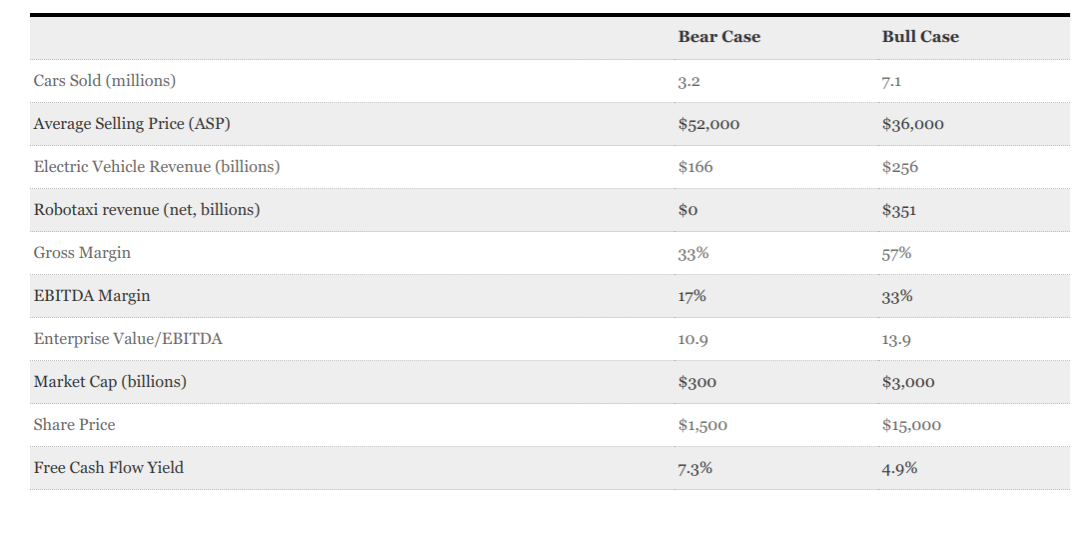 So yes the range of estimates on Tesla are wild.

And if you are investing now, you are taking extraordinary risks.

It’s very likely the shares will fall further from here – driven by very reasonable fears about supply chain disruption, funding, the collapse in the oil price, a collapse in demand for cars.

If you are looking to protect and grow your money, it would be far more sensible to invest in gold right now.

That’s the ultimate crisis investment. You can rely on gold.

But if you are a contrarian investor, you’ll be used to handling risk like this.
Rather than trying to guess the bottom, you might set a series of buy orders at lower prices so that you scale in your position as the stock bottoms out.

The big risk then is that Tesla can’t reopen it’s factories in the US for months yet.

I’ll keep you updated on that as the situation develops.